In a setback for the only model of nuclear reactor for which ground has been broken in the United States, government regulators have found additional problems with the design of its shield building, a crucial component, the chairman of the Nuclear Regulatory Commission said on Friday. 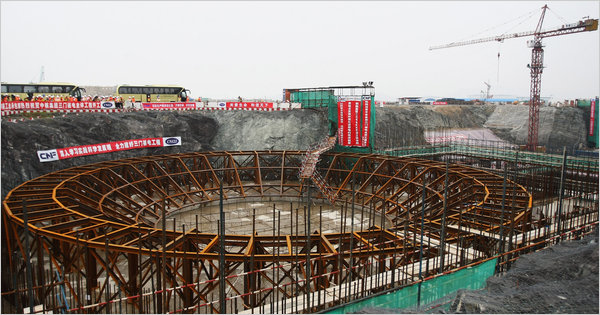 The Nuclear Regulatory Commission has more questions for Westinghouse, the manufacturer of the new AP1000 reactor, illustrated above.

The chairman, Gregory B. Jaczko, said that computations submitted by Westinghouse, the manufacturer of the new AP1000 reactor, about the building’s design appeared to be wrong and “had led to more questions.” He said the company had not used a range of possible temperatures for calculating potential seismic stresses on the shield building in the event of an earthquake, for example.

Mr. Jaczko said the commission was asking Westinghouse not only to fix its calculations but also to explain why it submitted flawed information in the first place. Earlier this year the commission staff said it needed additional calculations from Westinghouse to confirm the strength of the AP1000’s shield building. The building has not been built; the analysis of its strength and safety is all computer based.

The announcement comes as the commission and the American nuclear industry are facing increased scrutiny as a result of the calamity that began after an earthquake and tsunami damaged the Fukushima Daiichi nuclear plant in Japan in March, leading to releases of radioactive material. Various critics have asked the commission to suspend licensing of new plants, the relicensing of old ones and various other activities until the implications of the Fukushima accident are clearer.

While the commission has said it will evaluate the Japanese accident methodically, it had previously said it did not anticipate that this would cause a delay in approving the AP1000. Now, however, it appears far warier that it will finish this summer.

Westinghouse countered in a statement that the “confirmatory items” that the commission was asking for were not “safety significant.” It noted, and the commission agreed, that the company had been the first to identify some of the problems itself. Still, the commission seems to have taken a slightly darker view.

The Southern Company has already dug the foundations and done other preliminary work for two of the AP1000 reactors adjacent to its existing reactors at Plant Vogtle near Augusta, Ga. The Energy Department has promised loan guarantees for that project provided that the Nuclear Regulatory Commission approves the design.

South Carolina Electric and Gas has broken ground for another two, 20 miles northwest of Columbia.

The commission had previously said it expected to approve the AP1000 design this summer. But on Friday a spokesman for the commission, Scott Burnell, said the decision would be delayed for a period of time that he could not specify until Westinghouse submitted a third round of revised calculations.

“They need to be doing the work correctly and completely, and we need to have confidence that that’s what they’re doing,” said one commission official, who said he was not authorized to be quoted by name. “They have additional work they need to do, and a short time to complete it if it’s not going to have a significant impact on their schedule.”

Southern had been expecting to receive a license to construct and operate the new plant by the end of this year and to have the first reactor on line by mid-2016. On Friday, the company said it still planned to proceed. “We have confidence the AP1000 technology,” a company spokesman, Todd Terrell, said.

In addition to the plants in Georgia and South Carolina, ground has also been broken on four AP1000 reactors in China, two at Sanmen and two at Haiyang. Westinghouse, which is owned by Toshiba, is making parts for the Chinese units in factories in the Pittsburgh area.

The AP1000 was in principle designed so it would be faster to build and safer to run than previous models. The letters stand for “advanced passive,” with many of its safety features depending on natural forces like gravity and convective cooling rather than pumps and valves, which could be knocked out by electrical failures or floods as they were at Fukushima.

But the design involves a radical departure from those of existing nuclear plants. One change is to put a massive tank of emergency water on the roof so that no pumping is required to deliver it to an overheated reactor. Another is to build a free-standing steel shell around the reactor so that heat can travel through the metal and be passed off to surrounding air.

Existing Westinghouse reactors have a thick concrete dome with a steel liner that forms the reactor’s containment shell. In the new design, there is an air gap between the shell and the outer shield building, which is made of steel-reinforced concrete.

The commission has faced some internal dissent about the shield building, and outsiders have complained about the inner shell.

In its statement, Westinghouse said Friday that its reactor was “one of the most studied, reviewed and analyzed nuclear power plant designs in the history of the commercial nuclear power industry.” And it said that the value of its passive features was being recognized now “in light of recent events,” a reference to Fukushima.

Three other reactor designs are under consideration by the commission, but none of them has any prospect of being built soon. Under a reformed licensing system adopted in the 1990s, the commission is to approve a completed design before substantial work begins on reactor structures.

Beyond the AP1000, opponents of nuclear power are hoping the commission will slow down on other fronts.

“I commend Chairman Jaczko for exercising caution in light of the safety concerns that have been raised about the Westinghouse AP1000 design, and for announcing plans to fully examine outstanding issues regarding structural integrity and resiliency before approving the design,” said Representative Edward J. Markey, Democrat of Massachusetts and a longtime Congressional critic of the industry.

He added, “In the wake of the Fukushima meltdown, the N.R.C. also should suspend all of its licensing decisions on new designs, new reactors or relicense applications until it incorporates the lessons of the Japanese catastrophe.”